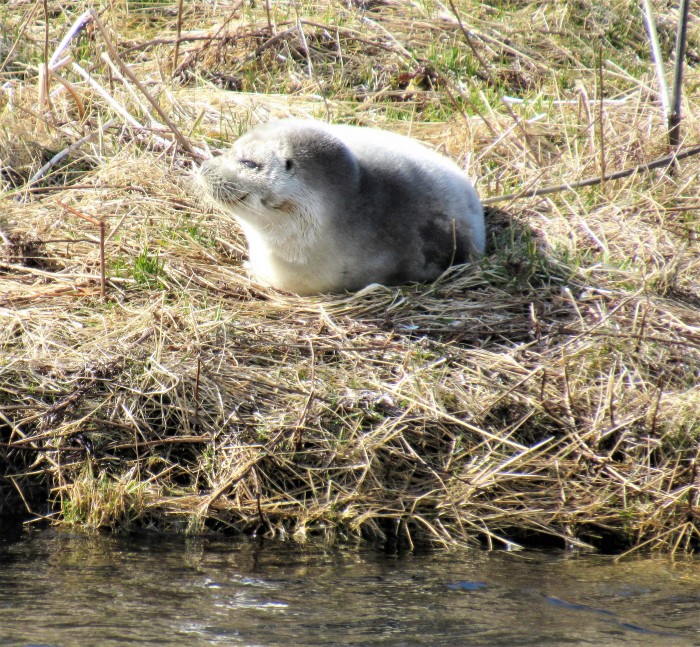 This little fellow, probably recently weaned, beginning to shed his baby coat, is resting on the banks of a fresh water river.  This is not near the mouth of the river.  Over the past two summers we have seen this type of activity occuring; sea mammals coming into fresh water when they never have before.  At least not in the memory of our oldest citizens of 80-90 years.  There have been three young seals frequenting the river over the past couple of days.  Several weeks ago, my husband witnessed 40 sea otters on a sand bar in the river, plus numerous ones farther upstream feeding.  And last year, we witnessed score of monstrous sea lions coming up the river after salmon.  Never.  Ever.  And it is March and the indigenous plants are breaking ground.

P.S.  I forgot to mention that this is a ringed seal.  There are at least two others frequenting the river.  An earlier one spotted was sick and was eventually captured and sent to a care facility.  One other was found dead.  They are an ice associated seal normally found further north.  According to biologists due to the unfortunate lack of sea ice this winter, they are finding other places to haul out and rest.  Because of warming temperatures, they are far out of ther normal territory.  These three seem to be healthy.

One thought on “Climate Change 2”