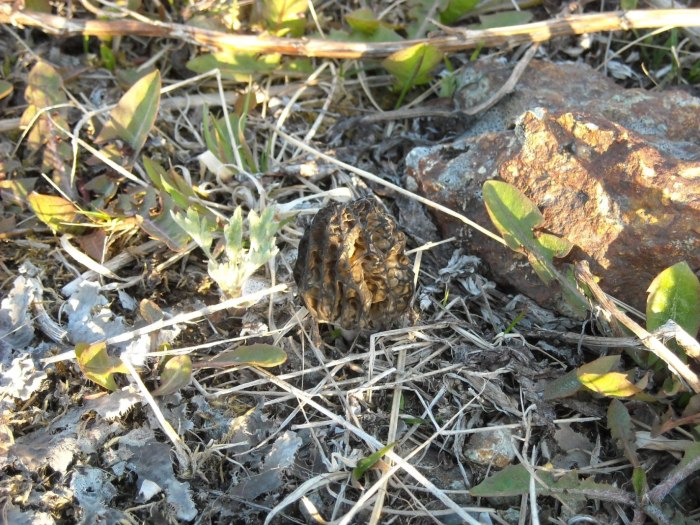 Morels, although not an Unangan medicinal plant, are a very heavenly, edible fungus.  I can remember finding them when I was a child along the beach road and the Town Creek bank.  Now, nearly 45 years later, they are a rare and precious commodity.  I don’t know if morels are native to the area.  I have always heard that they aren’t; that they came to the Aleutians as spores on the wood used to construct the facilities for WW II.  I do not know the Unangam tunuu word for this species, or if there even is one.  Anyone know?  I can’t find one.  Whatever the case, I have enjoyed them immensely, and half the enjoyment now, is in the finding.

When I returned to Unalaska with my children, I was reminded our first spring back, that the morels would be out for about two weeks.  When?, I asked.  When spring is here, was the answer.  When is spring here?, I inquired.  Sometime between April and mid-June, was the answer.  So those serious about tasting the heavenly morel in Unalaska, must be on serious alert for a very long time.  God help you if you get busy.  You’ll miss them for another year. 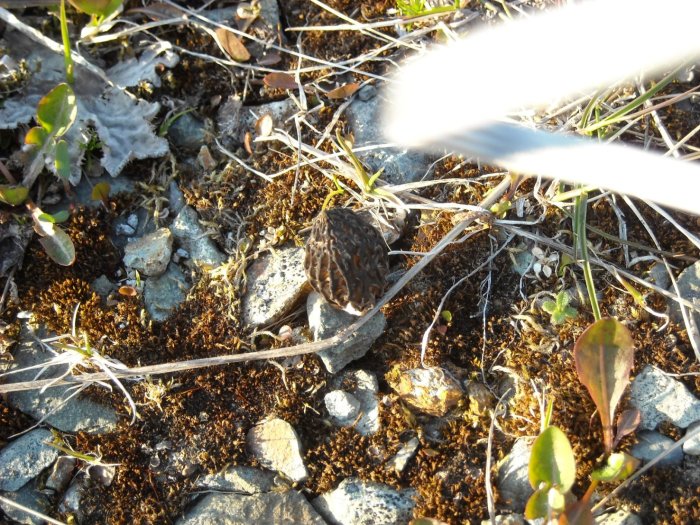 Families are strictly close-mouthed about their secret spots where morels can still be found.  New comers have actually taken to sneakily following locals in the hopes of catching them in the act of picking morels.  A chef from a local hotel, many years ago – not Rich – was actually poking through piles of horse manure in the hopes that that is where they grew.  I drilled into my kids the importance of the utmost secrecy surrounding our morel spots.  I can remember one day the girls bursting into the house with about nine morels, extremely excited about the new patch they had found.  I asked them if they had picked them correctly and they answered that they had thumped them with their index fingers prior to picking them.  This insures that any spore left in the mushroom will be shaken loose into the tundra, thus giving us more morels the next season.

All of my preaching worked good and well throughout the years.  One day when Alena was about 14 and Laresa was 12, they once again came bursting into the house with four morels.  They excitedly told me about a new patch in a most unusual spot.  A spot that I would never believe!  I grabbed my coat and started out the door.  They didn’t follow.  I turned back, with a question in my eyes.  They both smiled and told me that this was their patch.  They would be checking it every year – by themselves.  At least until they went to college; then I could take over for them.

Caleb – the spouse – whom I have known since 1972 but didn’t marry until 1997, would occasionally accompany me on my morel forays.  He was very unlucky at morel hunting.  He just couldn’t get the knack.  Morels are hard to find, like agates on the beach, and you have to train your eye to pick them out of the tundra.  That’s very hard to do  if you’ve never found one.  I have been known to spot them while driving down the road and it drives Caleb absolutely crazy.

One day we were taking a drive out to Morris Cove and on the way Caleb stopped the car in an area where he knew I would usually find morels.  He grabbed a bag and took off.  I yelled after him, asking him what he was doing.  He answered that he was going to find a morel if it killed him; where should he start looking?  I told him the morels were all over and he gave me a shrug and turned away, studiously looking at the ground before him as he walked.  I sat there, totally perplexed by his behavior.  After about twenty minutes, Caleb circled back and told me he wasn’t having much luck – again.  I laughed and told him that it was September.  He just looked at me.  I told him that morels came out in the spring and that the season was long over, not that morels were all over the place.

Caleb’s bad luck at finding morels lasted about eleven years.  He began to secretly think that I purchased morels at the store and then threw them on the ground in front of me, claiming a great find.  In the year of our Lord – 2000-  he actually found one and the way he carried on was worth the long hunt.  At least now he knows what to look for.  Not just the physical appearance of the morel, but where they might be located and how your eye can catch the color, the shape, the terrain they might be in and how they just seem to jump out of the tundra like they are yelling, “Here I am!  Eat me!” 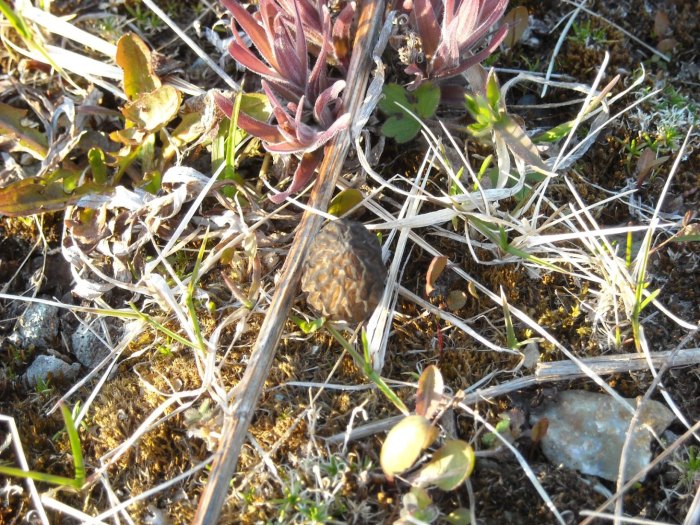 Morels are best, in my judgment, simply sauteed in butter, with a dash of Worcestershire sauce.  By themselves, or served on top of a juicy, rib-eye steak.   Use them fresh, or dried.  If using them immediately, slice them open to check for slugs (yes, we have little slugs) and rinse them with water.  Drain and dry them thoroughly.  If serving within a day or two, soak them in a bowl of water, covered,  in the refrigerator.  Drain and dry them before use.  To dry them for future use, simply lay them on wire racks, or use a needle and thread and string them up to dry.  They should only take 3-4 days to dry.  Store them in a covered container.  To reconstitute, soak them in water for about 15 minutes.

Morels can be used in any recipe you have calling for mushrooms.  But be careful not to overwhelm the deliciousness of the morels with strong flavors, or too numerous ingredients.

And when you are walking out there in the spring, take care not to step on morels.  It is very sad to come upon a morel that has either been smooshed by a human hiking boot, or nibbled on by a squirrel.

7 thoughts on “Morels…be careful where you step!”