The bald eagle is Alaska’s largest resident bird of prey.  It can have a wing span of up to 7 ½ feet and weighs in between 8 and 14 pounds.  Females are typically larger than male eagles.  In the early part of the 1900’s, some Alaskan residents thought that bald eagles were competing with humans for salmon.  A bounty was put on eagles from 1917 to 1953.  A payment between $.50 and $2.00 was given for every pair of bald eagle talons that were turned in to the Alaska territorial government.  Records show that the territorial government paid for 128,000 pairs of bald eagle talons during these years.  Although the bald eagle population was never at peril in Alaska, precipitous declines were seen in both the reproduction and populations of bald eagles in the lower 48 states.  After the banning of the pesticide DDT in 1972, populations began to slowly recover and it is no longer considered endangered or threatened.

In Unalaska we have no shortage of bald eagles.  In fact, they are so common that we did not even pay any attention to them until tourists started gracing our shores.  It became apparent that our ‘common’ was their delight.  Tourists are adamant about getting their pictures of bald eagles.  You’ll see tourists  standing in the middle of the road taking a shot.  They come into your yard with their cameras at the ready.  They scramble up steep, rocky slopes to get  better composition in their shot.  When I think about the eagle pictures I have taken over the last 30 years, I can pretty much say that I have taken probably 10 to 15 pictures of eagles that were not accidental pictures.  By accidental, I mean that I took a picture and an eagle happened to accidentally end up in it because they are just all over the place.

But there seems to be no getting around the fact that we have a plethora of eagles.  With our growing population we have also had eagle incidents where we have had eagle attacks on the heads of humans who have inadvertently wandered too close to eagle nests.  Unfortunately this “wandering” is simply walking down the sidewalk that happens to be next to a cliff where an eagle has built its’ nest.  So we teach our children to give eagles a wide berth, though it can be difficult at times when they just come walking across your lawn.

It’s a little difficult to ignore them when your mother inadvertently dumps the guts from cleaning fish within 50 feet of where you are tending the fish net.

They line the roof when you are out basking in the Aleutian sunshine.

They sit on the school roof and play in the playground.  Sorry kids, no recess today.

They are on every light pole.  You learn to give the area around the poles a wide berth.  And you certainly make note of which way the eagle is positioned so as not to be given a poop bath. 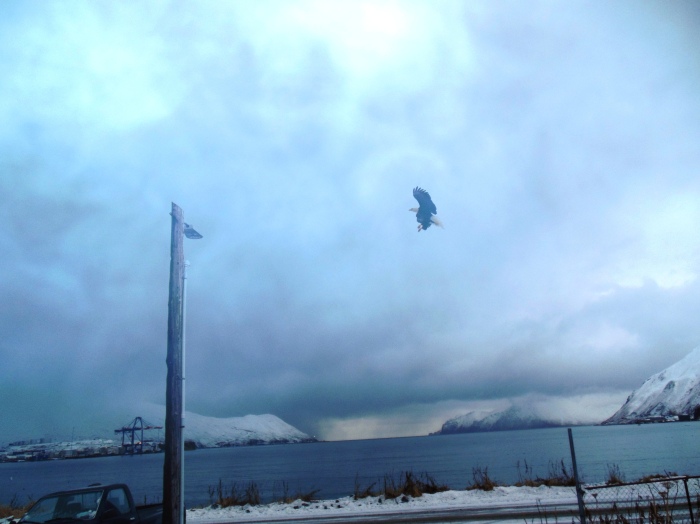 They don’t care if the pole is already taken.  They will share. 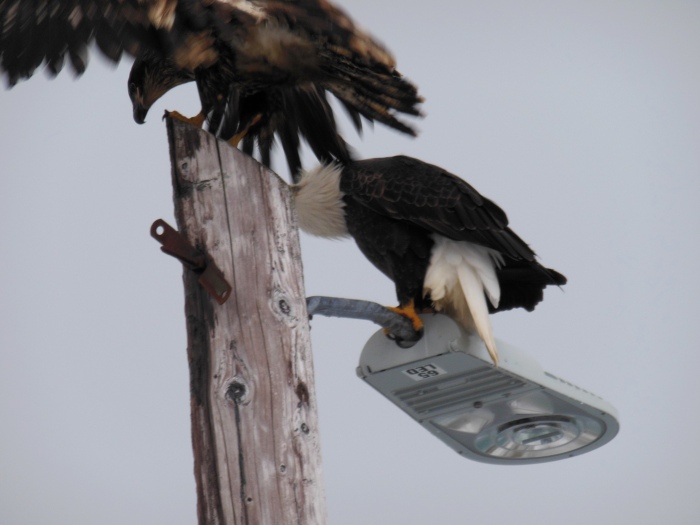 Even if it gets crowded. 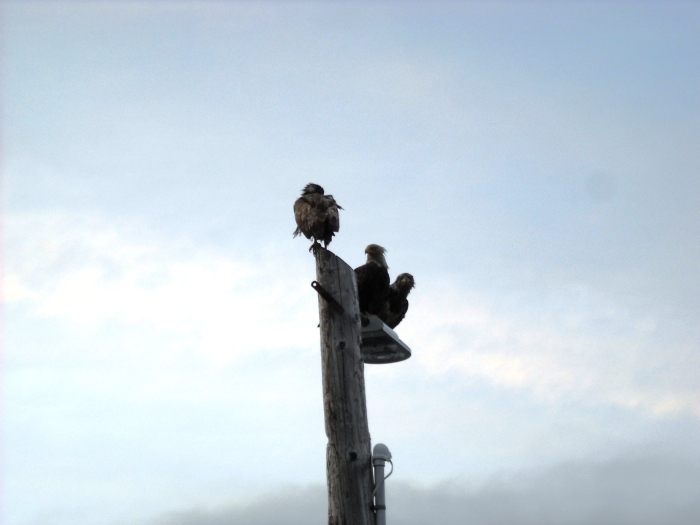 They are in the grass… 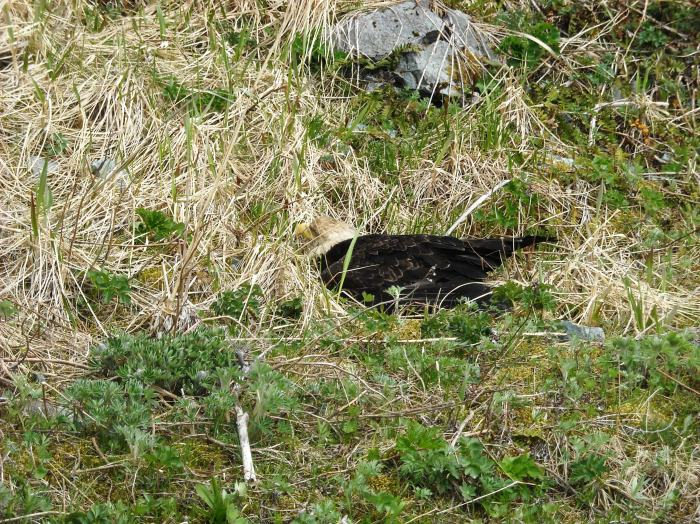 They perch on rocks…

They find a perch on all types of industrial equipment.

So having lived all but 22 years of my life among eagles, nothing should surprise me.  Boy was I wrong about that.  I went to the landfill today.  It is always heavily populated by eagles and ravens.  No big deal.  I backed up to the facility, got out and got one heavy bag of garbage out of my car and one very light bag of garbage.  I had the heavy one in my left hand, and the light one in my right hand.   When I was within about 3 feet of the residential dumpster, I saw a blur of motion that turned out to be an eagle, with claws extended, coming straight for my face.  I whipped that light garbage bag up in the nick of time and smacked that eagle away from me.  If it had been the heavy bag in that hand, I never would have gotten it up in time.  And if I did, I probably would have done some damage to the eagle.  As it was, no feathers were lost, and just the landfill employee and I had heart attacks.  I can’t believe how lucky I was.  And I actually am having a hard time believing that my reaction time, my reflexes, and my total ninja-ness were so incredible.  I saved myself.  I’m my own hero today.

3 thoughts on “Bald Eagles…learning to live with them”