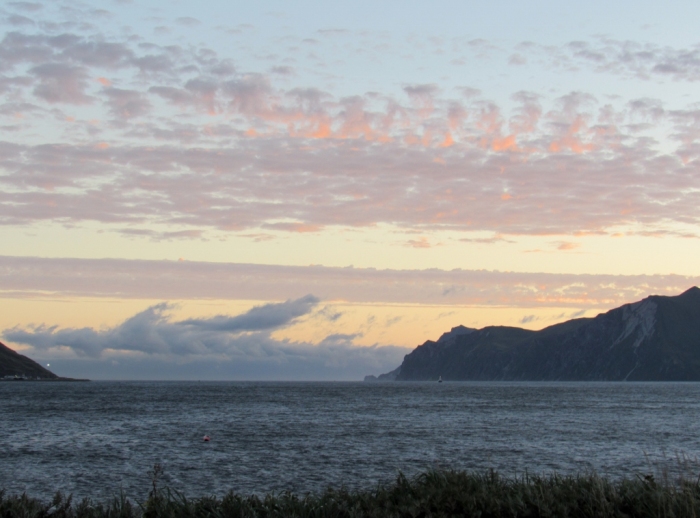 Our lives have come to revolve around the seasons much more than when we were younger.  I’ve come to think of winter as the months that bring wood to our beaches so that we will have wood for our smokehouse during fishing season.  Spring is when the plants start emerging, birds lay eggs, and the anticipation of good weather, calm seas, and fishing start ebbing in the corners of our minds.  Summer, of course, is the time of plenty.  Plenty to hunt and gather.  Plenty to do.  Fall is when we are racing against time to finish gathering the last of the berries and hoping for good weather to hold long enough to be able to get enough silver salmon for the family.

Last September the husband and I were feeling quite fond of ourselves.  We had successfully gotten some silver salmon.  The weather was beginning to turn, so we decided it was time to take the boat out of the water for the winter.  I will tell you that there are two days of the year that I dread more than any others.  The day we put the boat in the water and, worse yet, the day we take it out.  Husbands and wives should really not do this task together. Especially when you have a cheap husband who insists on doing everything as cheaply as possible.  Out of principle.

The boat trailer we use is a homemade trailer.  It basically consists of a homemade frame with wheels.  Lights and wiring that is not functional.  And where most boat trailers have some sort of rail system where the boat is winched up to rest on some sort of frame that has little wheels for smooth movement of the boat, we have two huge sheets of what looks like Teflon, set in a “V”.  No winch.  When putting the boat in the water, we have to back it down the ramp and into the water deep enough so that when we slam on the brakes the boat will jerk and then slip into the water.  When taking the boat out of the water, this system necessitates actually driving the boat up onto the trailer with enough power to get it up, but not enough to go through the back window of my car.  Let me tell you that the cussing and screaming is embarrassing to say the least.  I am traumatized beyond belief on those two days.

So last September after we had successfully gotten the boat out of the water and backed up into the driveway, I was so pleased to have that done with for another season.  It was then that my husband says that he feels like we forgot something.  But he can’t think of what.  Naturally, being the OCD candidate that he is, he finally slapped his forehead several hours later and exclaimed “We forgot to take the buoy and the anchor out of the water!”  Sure enough, there was the buoy floating out from the beach about 300 feet. You can kind of make it out in the picture.  It is pink.

Many people leave their buoys and anchors out year round.  They are not in the boat traffic path and it is one less thing that you have to do when  you are ready to fish.  We never have.  But I was not about to go through the boat fiasco again.  So it stayed in the water, wintering quite well.  It was something that my husband would look at each morning when going to the beach, and something that my mother looked for out her kitchen window each morning that she got up as soon as there was enough light to see.  Wouldn’t you know that on the 10th day of spring we would have a storm that was surprisingly stormy.  And our darned buoy is gone. And worse, yet, we have no idea where the anchor is resting.

Now the husband is busy hoping that the line broke where it attaches to the buoy, and thinking of what kind of gaff he needs to devise in order to be able to get that anchor back.  I’m just shaking my head. 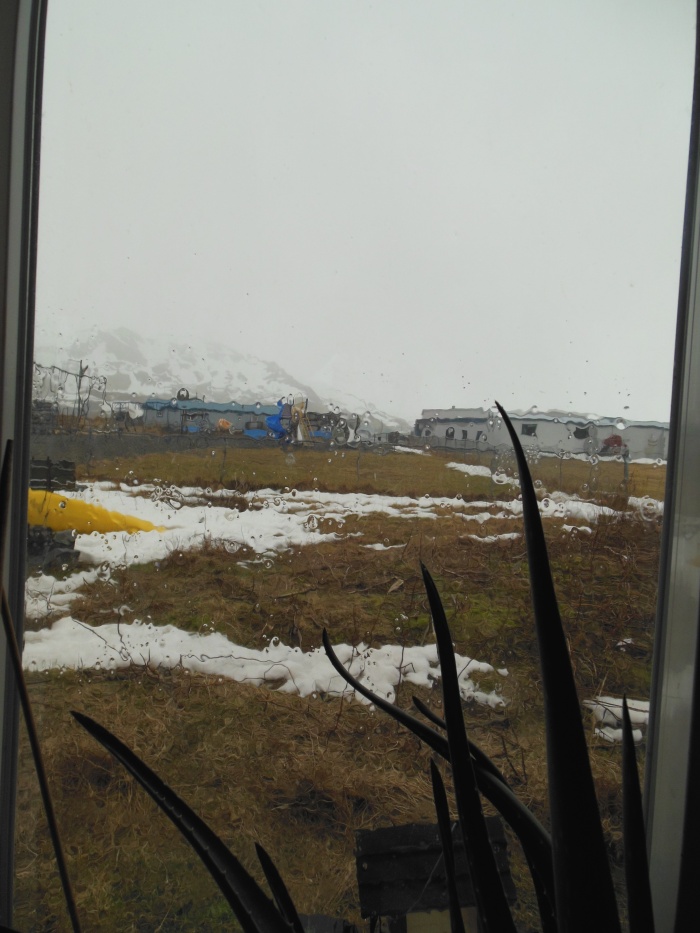 March, April, and May can be the most vexing months especially during the last few years when nothing that was before seems to be happening now.  Last year we had our last snow on May 31st.  Now as I glance over at the window, instead of just rain plastering the window, I see it has changed to lumpy rain.  I guess you would call it sleet.  The rain has been doing the job of melting mounds and mounds of snow, and opening up the wild landscaping to the previous fall’s compressed, tan detritus.  It’s around 8:00 PM, so the temperature is most likely dropping.  It is blowing about 35 from the ESE with gusts to right around 50 right now.  There is very little visibility out in the bay or surrounding mountains.  Can’t even see the mountains.  Yesterday it was almost that “S” word that we don’t say out loud or in print, just in case we jinx the season.  This morning everything was frozen.  Now it is blowing like hell.

Don’t get me wrong; I’m not complaining.  If there is one thing you can say about weather in the Aleutians it is that it is never boring.  It keeps you on  your toes.  I should probably invest in a waterproof casing for my camera.  As it is, I have to decide when is too wet and wild to take the camera out.   How much time do I want to spend wiping it down when I come inside?  When you grow up in a place known as the birthplace of the winds, you learn to judge how much the wind is blowing by observing the environment.  The first thing you observe is that there is always wind.  White caps generally start when it is blowing 25.  You can see gusts coming by the way they darken the water….black water.  We all look intently for black water at either end of the runway when we are making an approach to land.  Black water at the end of the runway is very, very scary.   You know that when the gusts are picking up water off the sea, it is blowing at least 50.  When that happens we call them williwaws. 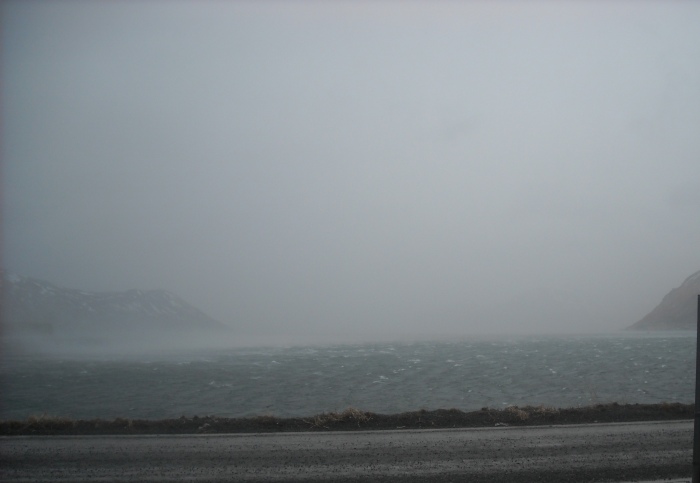 So while we wait to find what these next few months will bring us, I will just continue to be exhilarated by the weather.   Ah, yes.  I live in the birthplace of the winds; the islands of the smokey seas.

I am in awe of myself.  Not because of anything I am doing at the moment, but because of the amazing things I did in my twenties, thirties, and forties.  When my oldest child was 4 1/2, I gave birth to my third child.  It is true that once you have one child, adding to the mix is a piece of cake.  But…I stayed home for 6 years, (which has its own unique problems for a woman) until number three was 2 years old.  From that point on, I worked full-time, paying exorbitant amounts for daycare, and juggling our lives between traffic, school, homework, housework, and sanity.

Having experienced those now familiar institutions called separation and divorce, I did this juggling act pretty much on my own.  When number 3 was 4 years old, I took a look at myself, and the life I was going to be able to provide for my children and beat feet back to my home town in the Aleutians so that the kids could be raised near my family.  Wow!  What a difference.  No more daycare.  No traffic.  The kids walked to school.  Extended family was there.  The community was there.  Of course I added things to the mix, so instead of just working and raising 3 children, I also was on numerous boards and was very involved in revitalizing culture.  But I raised 3 kids who went to college, none of whom are in jail, and each is self-supporting.  Wow.

So I am feeling a little bit embarrassed about the fact that I am rooting for this horrendous storm that we are in the midst of to continue….at least until late tomorrow.  Why?  Because my number 2 daughter was just out of town for a week, leaving me in charge of her one and only 11 year old.  The plan was for her to come back on Friday, and then leave again on Monday for another week long business trip.  Well, this being the Aleutians, her flight was cancelled on Friday.  And on Saturday.  Now, any normal person would have just hung it up and continued on their way to Portland.  But this Aleutian woman that I raised finally made it home yesterday at about 2:40 in the afternoon.  And is schedule to leave sometime today.  I don’t know when.  She flies so much, she never knows her flight numbers and packs the day of her flights.  But after a week of being totally responsible for one child’s life, including feeding, homework, social activity, cleanliness, music lessons, et cetera, et cetera, et cetera….I really need a nap.  And a lazy day.  I want to throw in the towel.

I am really in awe of all those poor grandparents who have had to take on the role of parents in our society.  I have never been more aware of nature’s limitations on energy and patience.  The deja vu moments when you think, “Hey!  I’ve already done this!”  Yes, nature is right in making it more natural to have young when we are young.  I can manage to be an excellent caretaker for a while, but, yeah…..I’m ready for simply being there after school for 2 hours until mom gets off work.  That’s what I’m talking about.

Update:  The weather cleared up.  The planes flew.  My whining did no good.  But…I’m okay, lol, and SP is fine.