When you live within the Ring of Fire, you learn to live with volcanoes.  The “Ring of Fire” is a chain of volcanoes skirting the edges of the Pacific Ocean.  Containing 450+ volcanoes, it is shaped subtly like a horseshoe.  It stretches an unbelievable 25,000 miles from the southern tip of South America, along the coast of North America, including the Aleutian archipelago.  It continues through Japan and reaches down to New Zealand.

Unalaska Island’s highest elevation is Makushin Volcano, topping out at 5906 feet.  It is located approximately 15 miles west of the City of Unalaska.  It is an active volcano, with the last eruption noted in 1995.  Makushin is constantly steaming, which means it is venting…which is a good thing.  Bogoslof Island is 61 miles northwest of Unalaska Island.  Bogoslof, or Aĝasaaĝux̂, is the summit of a submarine stratovolcano located at the southern edge of the Bering Sea.  It was first recorded by non-indigenous seafarers during an eruption in 1796.  It has been erupting off and on through the years, sometimes losing terra firma and sometimes gaining.  It has become a breeding sanctuary for sea birds, seals, and sea lions.

Bogoslof began a series of eruptions in December 2016, almost daily, spewing volcanic ash clouds high into the atmosphere and sporting volcanic lightning.  Through all the fury of upheaval, the island, as of May 2017, has grown from 71.2 acres to 319 acres, or nearly 1.3 kilometers.  And what has happened to the animals that call Bogoslof home, or at least a respite?  Typically, animals are extremely adaptable.  They leave when there are explosions, swimming to nearby islands and come back when things are quiet.  The Fish and Wildlife Service has reported that even with eruptions occurring in March, marine mammals returned to birth their young.

In Unalaska we face a daunting number of issues when volcanic activity is present.  There are ash clouds and ash fallout.  Lahars and floods, pyroclastic flows, clouds, and surges.  Debris avalanches and lava flows are not so much a worry as are directed blasts, volcanic gases, and volcanic tsunamis.  If you are a resident of Unalaska, you really don’t dwell on the issue.  Unless, of course, you don’t get your mail; or your flight has been canceled because of ashfall.  When you think about it, the real danger is that we could be decimated in a matter of seconds by a pyroclastic cloud.  Or a nuclear bomb.  Volcano, bomb, bomb, volcano.  Worrying about it won’t make it go away and nothing we can do will change the outcome.  It is not a defeatist attitude.  It is part of the price we pay for living in paradise.

If you have ever been to the Aleutians during the summer, one of the first comments you are likely to make will be something about the abundant, large grass growing on the beach shores and up into the meadowlands.  You are looking at tix^lux^, or wild rye grass, or in the scientific lingo, Elymus mollis.  It is this beautiful grass that played such a large part in the lives of the Unangax^. 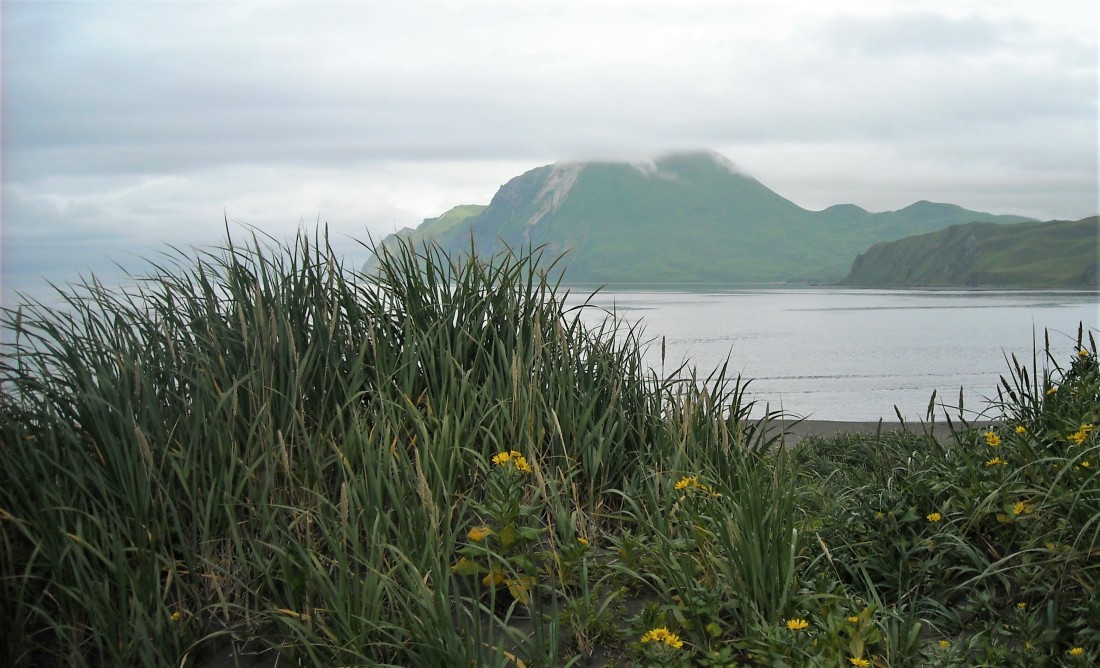 Weaving used to be a very utilitarian aspect of Unangan life.  Grasses were used to weave fish baskets, berry baskets, clam containers, floor mats, wall coverings, room dividers, mittens,  socks, burial mats, capes….you name it and it was probably a woven product.  The beauty of the fine weaving, though, was not recognized until the Unangax^ were invaded by Russian fur procurers and items began leaving the region, either as items taken forcibly, or, in later years, as items of trade.

I am lucky that my mother has passed on the art of gathering and curing grass for basket weaving.  It is no longer a common occurrence.  I miss seeing women returning from the hills carrying large bundles of grass over their shoulders.  Those bundles were tossed and dampened and protected from sunlight for up to 2 months, depending on conditions.  Then the grass was stripped down to the inner blades of grass; the ones that were at the center of the blade, thus protected from the salty elements.  One large bundle is reduced to a bundle measuring, perhaps, an inch in diameter.

Just so you know, both my daughters have been on the August grass gathering forays.

Our lives have come to revolve around the seasons much more than when we were younger.  I’ve come to think of winter as the months that bring wood to our beaches so that we will have wood for our smokehouse during fishing season.  Spring is when the plants start emerging, birds lay eggs, and the anticipation of good weather, calm seas, and fishing start ebbing in the corners of our minds.  Summer, of course, is the time of plenty.  Plenty to hunt and gather.  Plenty to do.  Fall is when we are racing against time to finish gathering the last of the berries and hoping for good weather to hold long enough to be able to get enough silver salmon for the family.

Last September the husband and I were feeling quite fond of ourselves.  We had successfully gotten some silver salmon.  The weather was beginning to turn, so we decided it was time to take the boat out of the water for the winter.  I will tell you that there are two days of the year that I dread more than any others.  The day we put the boat in the water and, worse yet, the day we take it out.  Husbands and wives should really not do this task together. Especially when you have a cheap husband who insists on doing everything as cheaply as possible.  Out of principle.

The boat trailer we use is a homemade trailer.  It basically consists of a homemade frame with wheels.  Lights and wiring that is not functional.  And where most boat trailers have some sort of rail system where the boat is winched up to rest on some sort of frame that has little wheels for smooth movement of the boat, we have two huge sheets of what looks like Teflon, set in a “V”.  No winch.  When putting the boat in the water, we have to back it down the ramp and into the water deep enough so that when we slam on the brakes the boat will jerk and then slip into the water.  When taking the boat out of the water, this system necessitates actually driving the boat up onto the trailer with enough power to get it up, but not enough to go through the back window of my car.  Let me tell you that the cussing and screaming is embarrassing to say the least.  I am traumatized beyond belief on those two days.

So last September after we had successfully gotten the boat out of the water and backed up into the driveway, I was so pleased to have that done with for another season.  It was then that my husband says that he feels like we forgot something.  But he can’t think of what.  Naturally, being the OCD candidate that he is, he finally slapped his forehead several hours later and exclaimed “We forgot to take the buoy and the anchor out of the water!”  Sure enough, there was the buoy floating out from the beach about 300 feet. You can kind of make it out in the picture.  It is pink.

Many people leave their buoys and anchors out year round.  They are not in the boat traffic path and it is one less thing that you have to do when  you are ready to fish.  We never have.  But I was not about to go through the boat fiasco again.  So it stayed in the water, wintering quite well.  It was something that my husband would look at each morning when going to the beach, and something that my mother looked for out her kitchen window each morning that she got up as soon as there was enough light to see.  Wouldn’t you know that on the 10th day of spring we would have a storm that was surprisingly stormy.  And our darned buoy is gone. And worse, yet, we have no idea where the anchor is resting.

Now the husband is busy hoping that the line broke where it attaches to the buoy, and thinking of what kind of gaff he needs to devise in order to be able to get that anchor back.  I’m just shaking my head.